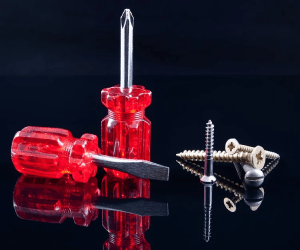 Before you think we are going to teach something “illegal”, rest assured, this blog only means to educate you just in case you find yourself in a situation where you have forgotten the keys and now you have no idea how to pick the lock.

Some may consider “lock picking”, as an art of some sort. Truly, it indeed is an art that keeps on getting perfect with time. Again, we are not saying you’ll have to be an experienced lock picker but still, you get the idea.

Let’s understand what exactly is the logic behind lock picking. For starters, it’s a simple terminology that refers to the act of opening a deadbolt or a lock by analyzing the components involved and then, by manipulating the flow by identifying a loophole. After the loophole has been found, a successful strategy is to use a tool like a screwdriver and leverage through that loophole.

Here in this informational blog, you will read about the overall symmetry of a deadbolt and we will also teach you how to open a deadbolt with a screwdriver.

Ensuring the security of your home and your family, is indeed, your foremost responsibility. We are living in a world where you can’t even trust your own neighbors. News bulletins are doing a really good job by reporting house break-ins and burglary incidents regularly. It’s one of the major reasons why home security is important.

The question still remains, what’s the most economical way of securing the house? The answer is, a good deadbolt.

If you want to enhance the security of your entryway, a deadbolt is one of the most easy-to-find items which deter the criminals from breaking in. There have been such incidents where, just by seeing a door locked with a deadbolt, the robbers simply turned their way towards the next house. Why is that? Only because the deadbolts are very successful items for securing your homes.

Of course, there are many types of deadbolts which you can use at your homes. Here in this blog, we will be teaching ways to open a simple deadbolt with a screwdriver because that’s a tool which is available in every home.

To better understand the mechanism of a deadbolt, let’s walk you through some of the major components of a deadbolt:

The main part of a deadbolt is the cylinder itself. It’s that part of a deadbolt where you insert the key. It comprises those pins which are manipulated by the key to lock or unlock the deadbolt. When you rotate the key, the pins move in a certain direction and once you hear the “click” sound, it’s an indication that it has been locked. You re-insert the key and rotate it in the other direction, it unlocks the deadbolt.

Within the door, a metal bar is there which comes out when you lock the deadbolt. This bar is called the bolt. Once locked, you will see that the bolt has penetrated through an opening and has been inserted in the door frame.

A plunger is a really smart component of a deadbolt. You may have seen in James Bond’s movies that a door lock is being opened using a simple swipe card. Well, gone are those days now because you can’t open a deadbolt with a card due to the presence of a deadbolt plunger.

There is a strike plate and a box which further ensures the solidity of the lock. Basically, it’s a hole which is done in the door frame that extends to adjust the bolt. Inside this bolt box, there is a metal plate which takes the bolt within when the deadbolt is locked.

Here are a few tips which can come in handy while you are searching for deadbolts:

Some Useful Tips on How to Open a Deadbolt With a Screwdriver:

We know this is the part for which you have been waiting so impatiently. Here in this part of the blog, we are going to teach you how to open a deadbolt with a screwdriver. Remember, this tutorial only means to educate you about how you can get out of a messy situation.

There are tools other than a screwdriver that you can use to open a deadbolt but you wouldn’t want to dismantle the entire assembly of the deadbolt.

Step 1: First of all, you need to check out which type of lock it is? Is it a standard key lock or a deadbolt?

Step 2: It’s a deadbolt! Awesome. Let’s pick a rather short screwdriver with a tip so small that it can easily fit into the keyhole of the deadbolt.

Step 3: Insert the screwdriver into the keyhole and imagine you are impersonating Jason Statham 😉

Step 4: Jiggle the screwdriver on all sides while it’s inside the deadbolt’s keyhole. Shimmy the blade in between the tumblers within the lock. Make sure your blade is long enough to hold all the tumblers up.

Step 5: Once the tumblers are all up, twist the screwdriver in the deadbolt and it’s highly likely that it will open just with a single attempt. Just in case it doesn’t, re-arrange the screwdriver’s blade to hold the tumblers up and apply more pressure than you did during the first attempt. Push it off a little and it will click open itself.

In our resourceful tutorial, we have taught you how to open a deadbolt with a screwdriver. It’s a pretty useful strategy and you should only use it in times of need. Keep all such tools and electronics away from the reach of your kids because kids are fascinated with these tools.