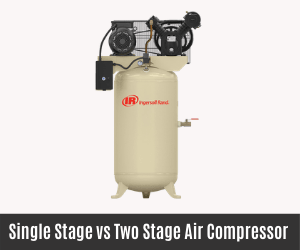 Air compressors have brought a lot of comfort and ease in our lives. Over the years, they have evolved significantly and playing more integral and beneficial roles in domestic and industrial industries.

Apart from their appearance, you can differentiate them on the basis of their work, compression stages, cooling method, drive method, and lubrication method. Among the three types of air compressors, the reciprocating air compressor is the most commonly used type that has many applications. The innovation level and efficiency of these air compressors are much higher than the rest of the two types. That’s why we will explore it in detail.

The entire process depends on two valves, i.e. intake valve and exhaust valve. Air enters the air compressor from the intake valve that is then compressed in the downward direction. It reduces the volume of the air. In the next step, the piston moves upwards and displaces the compressed air through the exhaust valve. This cycle repeats over again. This process is also known as positive displacement mechanics.

This is one of the most important parts of an air compressor that performs the principal part. There can be one or two pistons in the air compressors which compress the air and moves energy from the crankcase to the gas contained in the cylinder. Usually, aluminum or cast iron is used in the construction of the pistons.

Two shafts are used in the working of the air compressor. The bigger shaft is known as crankshaft while the smaller one is called the motor shaft. It’s responsible for moving the connecting rod, piston rod, and piston. This shaft moves the piston in the upward and downward direction and ensures the proper working of the piston.

The other parts of the air compressor include bearings, valves, and cross-head. Their functions and simple and self-explanatory. 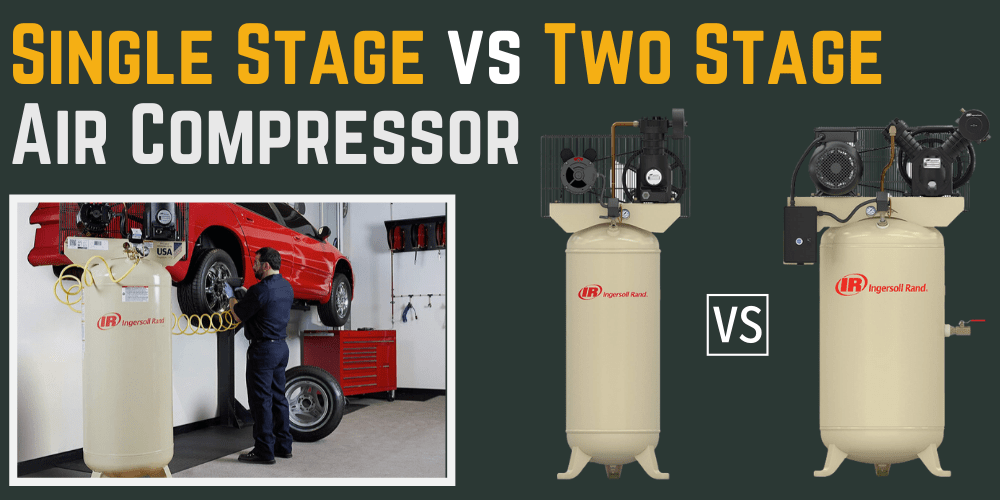 Single Stage Vs. Two-Stage Air Compressors – All You Need To Know!

The working principle of both types of air compressors is the same. The major difference is the number of times the air gets compressed between the inlet valve and the tool nozzle. However, their applications, benefits, and drawbacks are different. Let’s make a comparison between both types to understand the major differences.

The single-stage air compressor is also known as a piston air compressor that can compress air up to 120 psi. They are sued for pneumatic devices which need an air pressure of up to 100psi.

Once the compressed air is released from the piston, it enters the receiving tank where the maximum pressure is achieved. This tank is connected to the pressure switch that continuously monitors the pressure level. Once the preset value is achieved, the motor of the air compressor turns off automatically and it turns on automatically when the PSI level drops below the preset value of PSI. More compressed air enters into the cylinder and the cycle goes on.

In the two-stage air compressor, two pistons are used to compress the air. Air is compressed at low pressure in the first piston and then it’s sent to the second piston instead of sending it to the cylinder. The second piston compresses it further and the double compression divides the work between the two pistons and never overloads the single piston. It also helps you achieve a high-pressure level that is required in heavy industries.

There are a few downsides of the dual-stage air compressor as well. They are bulky and heavy as they have to produce high power. However, the extensive weight makes them very difficult to carry and you even can’t move it from one place to another with ease. The absence of a portability feature also causes storage problems as keeping them on a car’s trunk or at home is a bit difficult.

It requires high maintenance and proper care. The heavy assembly of the dual-stage air compressor requires proper lubrication and regular oil change. If the oil isn’t replaced properly, then the chances of damage get higher. Oil attracts dust and the accumulation of dust and oil affect the performance and efficiency of the air compressor.

The comparison between the single-stage vs. two-stage air compressors is incomplete without mentioning their respective applications. They are designed to deliver high air pressure and capable of delivering 175 PSI air pressure.

Single-Stage Vs. Two-Stage Air Compressor – Which One Would You Choose?

So, what’s your choice? We have tried our best to provide a comprehensive comparison of single-stage vs. two-stage air compressors.

Before you say goodbye, make sure to check out the following few hand-picked air compressors for your work.